History of the synagogue in Odenbach

By a great amount of public means the building was restored and the rare mural art paintings were able to be conserved.
Therefore the former synagogue is not only an art-work gemstone, but also a rare example of a synagogue in a rural area.  ﻿﻿ 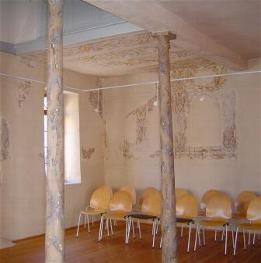 1752 Construction of the synagogue – decoration with mural art of the school of Eliezer Sussmann.

1835 Reconstruction of the synagogue.

- construction of a separate women’s gallery

During the second half of the 19th century emigration and migration to cities result in a steady decrease of population.

1938 During Kristallnacht the interior is

In the following years the building is used as storage.

1986 The former synagogue is declared as a site of historical interest.

Since 2007 after final restauration many cultural events took place

2016 A memorial stele is erected remembering to the victims of the Holocaust in Odenbach. Their names are written on the plaque.